Led by the country’s all-time leading Olympic scorer and tournament MVP Kevin Durant, the USA beat France in the Final to capture the gold medal for the fourth consecutive time while reigning World Cup champions Spain reached the Quarter-Finals.

Australia made it to the podium of the Olympics for the first time by winning the Bronze Medal Game over Slovenia, who nevertheless jumped 12 points to the No. 4 world ranking.

Led by superstar Luka Doncic, Slovenia built on their FIBA EuroBasket 2017 title by winning the OQT in Kaunas, Lithuania, to clinch their first spot at the Olympics.

Among the different factors to consider when looking at Slovenia’s jump was the fact they went into the OQT and the Olympics at No.16 and beat higher-ranked teams at both events – and by big margins, which also awards more points. They won decisively at the OQT over both No. 13 Poland and No. 8 Lithuania, as well as claiming decisive victories over Angola and Venezuela. Then in Tokyo, among Slovenia’s four wins were an 18-point triumph over No. 4 Argentina and an eight-point success against No. 2 Spain.

As the rating system awards points based on the difference in teams’ ratings, Slovenia received more rating points when winning against those higher-ranked teams.

After reaching the podium at the FIBA Basketball World Cup in China as the winners of the Third-Place Game, France went one better by claiming the Olympic silver medal. Les Bleus defeated the USA on opening day and won five consecutive games before falling to the Americans in the rematch that was the title game. It was France’s best showing at the Olympics since Sydney 2000 when they made it to the Gold Medal Game. France have moved up two points to No. 5 in the rankings.

Argentina, whose Luis Scola ended his legendary career at the Tokyo Games, made it to the Quarter-Finals of the Olympics, but their overall showing was not as good as previous appearances and they dropped three places to a No. 7 ranking.

By missing the Olympics, Lithuania dropped one place to the No. 9 spot while Greece fell four to No. 10.

Because the ranking has an eight-year competition window including two Olympic cycles (2020 not taken into consideration due to the pandemic), results from the London 2012 Olympics have dropped out while the Rio 2016 Olympics’ results weightings went from .75 to .5.

Japan benefitted from taking part in the Olympics and moved  up seven places to No. 35. However, Croatia, a country propelled by electric performances from Dario Saric and Bojan Bogdanovic at their triumphant OQT in Turin five years ago before reaching the Quarter-Finals in Rio de Janeiro, followed up their World Cup absence with another in Tokyo and therefore dropped seven rungs on the ladder to No. 21.

Further down the rankings, Syria have climbed 10 spots to No. 82, with their qualification for the FIBA Asia Cup a contributing factor. Tunisia moved up four spots to No. 30, to join Nigeria (No.23) in the top-30 for Africa. Uganda made the continent’s largest rankings jump to No. 90, moving up eight positions.

In the Americas, there were big jumps for Costa Rica and Nicaragua. The former moved up 22 places to No. 84 while the latter rose 19 places to No. 97.

Andorra, meanwhile, have fallen 19 places to No. 99 after having not competed at the continental or world level since 2018 outside of the European Championship for Small Countries that is currently taking place. 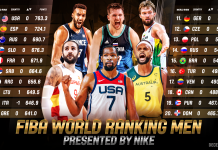