Phoenix Suns big man Aron Baynes revealed in a conversation with Shams Charania that he tested positive for the coronavirus and hopes to join the team in Orlando soon.

Baynes mentioned that his family tested positive too, but they’ve since recovered and are testing negative, while he continues to test positive.

“They all had very minimal symptoms, whereas it actually put me on my butt for a good week,” Baynes said. “I slept for four days straight.”

Although he says he’s feeling better and isn’t contagious, Baynes must still return two consecutive negative tests at least 24 hours apart before he can get medical clearance to travel to Orlando and join the Suns.

Once he gets clearance and eventually arrives, he will need to quarantine for 48 hours and return two more negative tests.

“Can’t wait for @aronbaynes to join us in Orlando,” the Suns tweeted in response to Baynes’ interview.

Baynes was one of four Suns players who didn’t originally travel with the team to Orlando.

Ricky Rubio finally joined the team in practice on July 21, while Elie Okobo and Jalen Lecque’s status is still unknown. 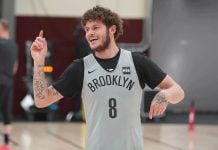 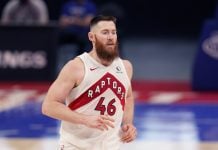