The New Orleans Pelicans provided an update on rookie Zion Williamson, who left Orlando to attend to an urgent family medical matter.

Williamson has reportedly been getting tested daily for coronavirus while away from the team and continues to produce negative test results and remains away indefinitely, according to Shams Charania.

While there is no current timetable for his return to campus, he fully intends to rejoin the team.

“Per NBA protocol, his quarantine period will be determined upon his return,” according to the team.

It seems unlikely that Williamson will participate in the Pelicans’ three scrimmages.

His status for the team’s first of eight “seeding games” on July 30 against the Utah Jazz will also be up in the air.

This season, Williamson is averaging 23.6 points, 6.8 rebounds and 2.2 assists per game. 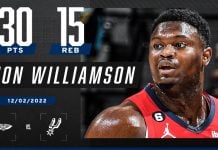 Zion Williamson will play today vs. the Clippers