Dirk Nowitzki shared his thoughts on the farewell season of Vince Carter cut short because of the coronavirus.

The legend of the Dallas Mavericks said he ‘felt bad’ for Carter, who did not deserve such an abrupt end to his great career.

“I probably would have not went through another season just because I didn’t get the ending that I was hoping for. I felt bad for [Vince Carter].

What he’s been doing for, now in his 22nd season, is amazing and I’m sure the last couple of weeks and months he would’ve deserved and gotten a couple more standing ovations maybe even a going away thing too.

I felt bad for him listening to that press conference,” Nowitzki said during his appearance on the BaD Radio on Sportsradio 96.7 FM/1310 The Ticket [KTCK-AM], as transcribed by The Dallas Morning News. 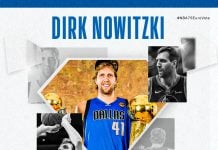 Dirk Nowitzki: “Players forcing their way out is not the way to go”