Kevin Garnett admitted he should have become teammates with Paul Pierce earlier than they did.

The future Hall of Famer believes he should have won more titles with the Boston Celtics.

“If I could actually go back and change anything, I would’ve left Minnesota a little earlier, knowing that the management wasn’t as committed as I was.

Or wasn’t committed at all. I probably would’ve went to Boston or changed the situation earlier. I would’ve been a little younger and that means less wear and tear on the body.

Teaming up with Paul (Pierce), I should’ve done that earlier. Who knows — I’m probably sitting here with another ring or two. But, yeah,” Garnett told Shams Charania of The Athletic.

Garnett and Pierce led the Celtics to the 2008 NBA title. 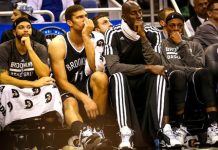 The Warriors should trade for Nikola Vucevic, says Paul Pierce

Knicks’ Reggie Bullock is ready to help the defense

Kendrick Perkins reacts to James Harden’s debut with the Nets

Delonte West has a job at the Rebound therapy center in...