With a much-needed, temporary sunlight beaming on them following a thunderous week marred by outpouring controversies, the Brooklyn Nets are continuing their progress with small steps ahead. Jacque Vaughn elevating from his position can only offer added optimism in what could be crucial moments to enjoy for.

Hours after dispatching the interim tag into his designation within the Nets franchise, Vaughn officially landed his first official win as a clear head mentor, guiding the club to a pulverizing 112-85 victory against cross-borough nemesis New York Knicks.

Kevin Durant and all of the Brooklyn personnel are delighted and ecstatic about the possibilities and new beginnings that they can face with Vaughn leading their charge.

“I was excited for him,” Durant said, courtesy of ESPN’s Nick Friedell. “I know the work that he puts in every day. I know how much he cares about the development of each player and this team as a whole.

“Look forward to playing for him. All the guys have responded to how he wants us to play, so I’m looking forward to how we progress after this.”

Following the demotion of Steve Nash from the team’s head coaching post, Vaughn boldly assumed the hefty responsibility of calling the shots temporarily for the dysfunctional, fuming Nets that was facing unwanted connection on Kyrie Irving’s antisemitism stances. With him at the front and driving, Brooklyn steered a 3-1 record in their last four games.

These last four occasions offered sights to behold for the Nets with Vaughn providing his guidance, as they clawed their way inch-by-inch to resurrect their season early from a chaotic beginning.

“We were struggling, we’ve been through a lot,” Durant said, narrating his thoughts on why the Nets found sudden life from last week. “Guys got pride, individual pride, and we just wanted to come out and play better. That’s what we’ve been doing.

Durant dropped a major triple-double of 29 points, 12 boards, and 12 assists to dump the Knicks since the game’s early portion became the main spark plug of how the Nets grabbed the easy win with collective effort backing up. As such, Vaughn can only commend the superstar forward’s effort to connect each and every one.

“I think we really came out with the right mindset,” Vaughn said. “That first group really established our will. We picked up full court, really tried to put an imprint on the game, and then guys just filtered in off the bench and had an impact. Kevin’s job of getting the group going, his ability to be a hub for us, rebound for us, come up with a triple-double, set the tone.” 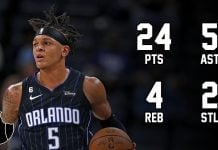