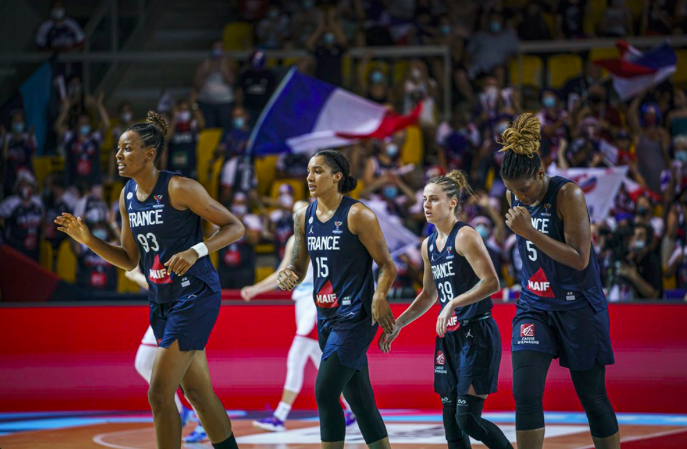 France continued their impressive start to EuroBasket Women with a comprehensive 71-51 win over Czech Republic.

A 12-3 burst in the third quarter by the French erased a closely fought first half, as the Czechs – who only trailed 32-29 at the interval – were outscored 39-22 in the second.

And as the Czech Republic stalled, France, led by 16 points from veteran Sandrine Gruda, pulled away.

European champions, Spain bounced back from their opening day heartbreak against Belarus with a 76-55 win over Sweden.

The Spaniards suffocated their Swedish counterparts from the first quarter onwards, racing to a 21-9 lead, eventually taking a sizable 47-17 advantage heading into the half-time break.

Astou Ndour led the victors with a double-double of 22 points and 13 rebounds. Laia Palau, who played 17 minutes, without registering a point, competed in her 70th EuroBasket Women’s game, setting a new record for tournament appearances, surpassing Uliana Semjonova.

Like Spain, another team that rebounded from a surprise loss was Belgium, as they comprehensively beat Slovenia 92-57 in Group C.

Emma Meeseman shot an impressive 10/11 from the field for 23 points, as they Belgians atoned for their loss yesterday against Bosnia & Herzegovina.

On the flip side, Slovenia will be disappointed as they failed to build on their solid opening day win over Turkey with a tame showing.

In the other Group C game, the Bosnians proved that their shock win over Belgium was no fluke, as they came from behind to topple Turkey 64-54.

Jonquel Jones’ sublime 22-point, 15-rebound effort for Bosnia & Herzegovina was enough to secure the win, even though they trailed 44-38 heading into the fourth. And were not playing with the urgency that their magical final quarter eventually showed.

Elsewhere on day two of EuroBasket Women, 2015 winners, Serbia went 2-0 with an easy 85-51 win over Greece; Italy got off the mark with a 77-61 victory over Montenegro; Slovakia narrowly got the better of Belarus, 58-54 and Russia handed Croatia a second straight loss with a 73-62 win.

Tony Parker on his motivation to become 1st European NBA Finals MVP in 2007: “I just wanted to stay laser focused”

Enes Kanter Freedom: “I have loved Panathinaikos for many years”