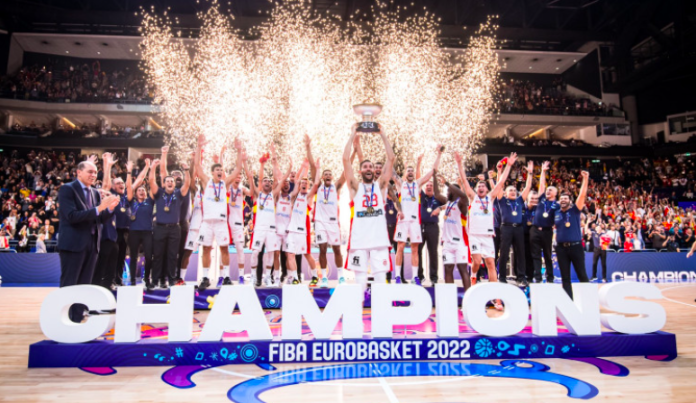 Spain can once again add the EuroBasket title to their World Cup crown.

Led by 27 points from Juancho Hernangomez, who went 7/9 from three-point land in that haul, Spain bested France 88-76 in the championship game in Berlin on Sunday to secure a fourth European gold.

However, they certainly made their fans sweat, nearly wasting a 21-point lead but eventually getting the job done.

It also marked the first time that Spain did not trail by double figure in the knockout rounds, having had to rally back in their other three games.

“It’s hard to explain how I feel with words,” Willy Hernangomez said.

“I am very proud of my teammates, the coaching staff, the whole Spanish federation – from the top to the bottom. We much deserve this gold medal, the way we grew and developed through the tournament. It was something amazing.

“The trust that was inside the locker room was something special. I’m just so proud, so lucky to be around those guys. Because they trusted me from the beginning. I’m just thankful to be part of this amazing team.”

And it was the Hernangomez brothers who carried the scoring load for Spain, particually in the first two quarters. They combined for 28 of 47 first half points, shooting 9/13 from the field.

However, for the majority, Juancho shone in the first 20 minutes, reliving his Bo Cruz persona to torch France from deep, missing just one of his seven attempts.

France were outplayed in almost every department but still managed to hang around, only trailing by 10 points at the half.

They nearly were rewarded for their hard work, as a basket from Guerschon Yabusele brought France to within three points with more than three minutes in the third quarter played.

But it didn’t last. Spain regrouped and towards the end of the period, restored their double-digit cushion, which was largely maintained in the fourth.

“It’s easy to be happy as a basketball coach,” said Spain coach Sergio Scariolo, who has led La Roja to the last four EuroBasket crowns.

“We went into this championship ranked eighth in the power rankings, and we managed to climb step by step.

“We left behind unbelievable teams – this last one, an incredible team full of top level players, all-stars – at this  extremely high level EuroBasket. It’s amazing to see the final standings and to see we are above all those great teams. I am happy for the team. It’s been a great journey.”

Spain have now won four straight EuroBasket Finals after having lost their previous six title bouts. By doing so, they collected their 14th podium finish behind only Soviet Union (21) and Yugoslavia (17).

On the flip side, France collected their tenth medal in the competition, becoming the sixth team to reach that tally. Soviet Union, Yugoslavia, Spain, Czechoslovakia and Italy being the others.

“Spain played better from start to finish,” said Fournier. “They had a clear game plan and we did not execute ours well enough. Too many turnovers, 35 points (off those turnovers). We never really had control of the game. They just played better. Not much more to say.”

France coach Vincent Collet added: “They played great. They could do most of the things they planned to do on both sides of the floor. We knew that we would be very aggressive. Our pressure was not the same that we did on Friday. Today we have lost the gold.”