Kawhi Leonard and Paul George opened up about how to guard the Dallas Mavericks superstar Luka Doncic.

Doncic had 29 points and six assists for the Mavericks on Thursday, yet Leonard, George and the Los Angeles Clippers earned the win (111-126).

“It’s a guy that you have to game plan around. I mean, you see it tonight, how he just constantly put pressure on us. But I think this team, we have so many defenders, we got so many guys, it’s just tough over a full game where you have to go through defender after defender.

At some point, you get worn down. He ended up with a big stat line tonight. I think we made it as tough as possible for him,” George told reporters, via The Athletic.

“Just showing bodies, bodies in front of him. He’s a great passer, can get to the hole, gets to the free-throw line, shoots the 3 well. He has the whole package so we’ve got to be ready,” Leonard added. 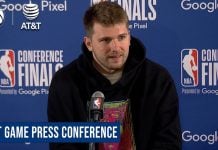