A proven scorer and clutch game-changer, Hickman (1.89 meters, 28 years old) is coming off the most memorable season of his career. He was Maccabi’s leading scorer with 12.2 points, and also averaged 2.7 assists and 2.6 rebounds for the continental champs last season, but raised his game come playoffs time.

Hickman finished as the Euroleague playoffs leader in index rating (22.3), while ranking among the top five in scoring (16.5 ppg.) and assists (4.5 apg.) to help bring Maccabi to the Final Four. Only two players attempted more foul shots last season than Hickman’s 127, and he ranked seventh in the Euroleague with 4.2 fouls drawn.

Hickman has taken a longer road to stardom; he began his professional career with PVSK Pecs in Hungary and played for CS Otopeni Bucurest in Romania and BG 74 Goettingen in Germany’s Regionalliga. After moving to Giessen 46ers in Germany and Namika Lahti in Finland, Hickman went to Italy for stints with Junior Casale in LegaDue and Scavolini Pesaro in Italy’s top flight. He joined Maccabi and made his Euroleague debut in 2012, and was the club’s leading scorer in the past two seasons. 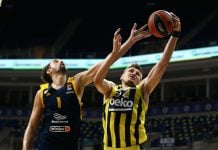 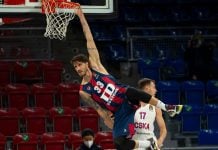 Achille Polonara to join Fenerbahçe next season, per report

Skip Bayless argues LeBron James is the most protected athlete

CSKA Moscow in advanced talks with Pierria Henry, per report

Lonzo Ball reveals best advice he got from LeBron James while...

Paul George on Joe Ingles: “I don’t care about him, next...