Mark Cuban, the owner of the Dallas Mavericks, explained why the NBA should start the 2020/21 season on Christmas.

Cuban believes such a move would put the league in a position that it won’t be going head-to-head with the NFL.

“We’re going to have a lot more options and a lot more flexibility to start later and end later. And rather than taking on football with, you know, our first early games, let’s let them get close to playoffs and just go wholeheartedly starting Christmas Day,” Cuban said on Pardon My Take, via John Chick of theScore. 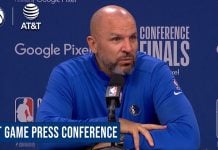