The 2019-2020 NBA regular season is over halfway done and there are still several rookies, who were drafted, that have yet to make their debut.

The 13 players and where they are now: 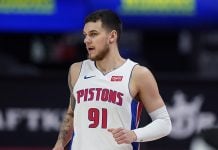