Euroleague Basketball announced that Milos Teodosic of Virtus Bologna has been chosen as the MVP of the 2019-20 7DAYS EuroCup Regular Season.

Teodosic has dominated despite coming off his team’s bench, leading Virtus to first place in Group A and a share of the best regular-season record in the competition at 8-2.

The legendary point guard led his team in scoring, assists and performance index ranking. He ranked second in the entire competition in points per 40 minutes (26.8).

The Serbian guard averaged 16.9 points and 5.6 assists over nine games in the competition. 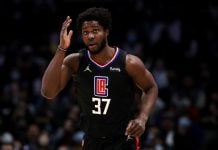