Former NBA player Gilbert Arenas was critical of the celebration regarding the first three-pointer in the career of Ben Simmons.

“If you get celebrated for making your first three in three years, and they give you $200 million, just go home, man. This is something that shouldn’t be happening.

Everybody’s dancing on the sideline; they called a TV timeout. Had a parade because he made a three,” the three-time All-Star said during his appearance as guest star in the “Certified Buckets”.

In the sixth episode, the hosts discuss Anthony’s return, Wild Washington Wizards stories and who under 25 in the NBA – like Luka Doncic, Giannis and more – are MVP worthy.

Listen to the sixth episode here 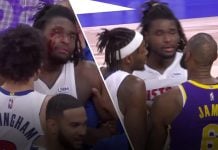