Khimki forward, Janis Timma, suffered an injury and will be sidelined for the next two weeks, according to Eurohoops.net.

Timma, who has been averaging 12.7 points in the EuroLeague so far, missed the game against Parma (VTB League) a few days ago, while he will not play against Real Madrid and Valencia next week.

The official announcement of Khimki regarding the nature of the injury is expected. 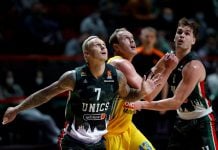