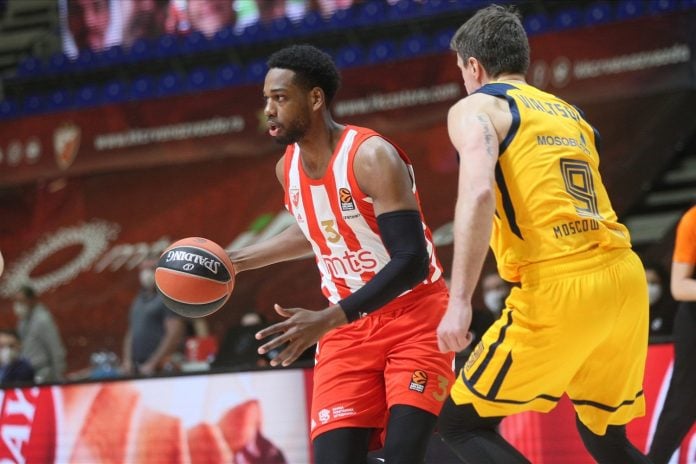 Crvena Zvezda managed to end its losing streak by beating Khimki with a score of 92-81 in Round 29 of the EuroLeague.

During the first 29 minutes, Khimki was leading and it looked like the home team didn’t have the strength to come back. But, Zvezda did come back from a double-digit deficit, thanks to an excellent three-point shooting night.

This was the first victory after nine consecutive losses and 8 in total. Zvezda has 21 defeats and the team is in the 17th position so far, while Khimki is last with 3 wins and 25 defeats.

The team from Serbia used the opportunity in the last 10 minutes and surprised with versatile long-range strikes. Khimki couldn’t respond and in those moments it was clear that the team from Russia was missing players who were out due to various reasons: Alexey Shved, Jannis Timma, Stefan Jović, and Devin Booker.

In this match, Dejan Davidovac reached his milestone of 500 in the EuroLeague with 16 points (2/2 for two and 4/4 for three). His teammate Jordan Loyd had 22 points, while Corey Walden added 15 and Ognjen Dobrić 12.

On the other side, for Khimki, Errick McCollum scored 29 points and Jordan Mickey contributed 27 in defeat.

In Round 30, Khimki will welcome Valencia in Russia, while Crvena Zvezda is traveling to Athens to face Panathinaikos.