Italy made an excellent offensive performance and crushed the Philippines in the Basketball World Cup opener (62-108).

On the other hand, Andray Blatche and Jaymar Perez had a team-high 15 points apiece for the losing squad.

The Italians made a great start and outscored their opponents 8-35 in the opening quarter. After that, the Philippines never recovered (24-62, 39-85) and suffered a heavy defeat. Italy made 15 three-pointers in the game.

Italy will battle Angola on Monday (02/09), while the Philippines will face Serbia. 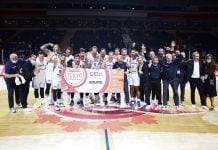