Per Adrian Wojnarowski and Zach Lowe of the ESPN, the Houston Rockets offer Clint Capela, Eric Gordon and PJ Tucker in order to pursue Jimmy Butler.

According to the report, the Rockets want to offer Capela, Gordon and Tucker individually to teams with significant salary-cap space in order to pursuit a sign-and-trade deal for Butler.

Houston wants to secure the best available first-round pick acquired for any one of the three players as part of a larger deal with the Philadelphia 76ers.

Capela has four years, $66 million left on his contract, Gordon has $14 million and Tucker $16 million over two years left on their contracts. 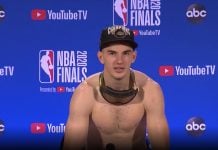