It is mid-November, but Carmelo Anthony is still without a contract. The 38-year-old forward, who spent last season with the Lakers, is not drawing much interest from the teams in the NBA and it seems he is not against a possibility of playing overseas.

Fellow ex-Laker Dwight Howard recently signed with a Taiwanese team Taoyan Leopards and Melo could follow suit. According to a new report out of Taiwan, the Tainan TSG GhostHawks have opened talks with Anthony’s representatives about a potential signing.

Tainan TSG GhostHawks head coach Liu Meng-chu (劉孟竹) said Sunday that Taiwan Steel Group had greenlit the signing of a marquee overseas player, with a deal for NBA free agent Carmelo Anthony already in the works. At a pregame press conference ahead of Sunday’s matchup against the Taoyuan Leopards, Liu said the GhostHawks had opened talks with former Los Angeles Laker Anthony’s representatives.

Last season the ten-time NBA All-Star averaged 13.3 points, 4.2 rebounds and 1 assist in 26 minutes per game for the Lakers. 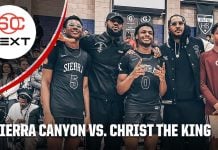