A worn Michael Jordan jersey from Game 1 of the Chicago Bulls’ 1998 Finals sold for a record $10.1 million Thursday, according to Sotheby’s.

Jordan wore the jersey during Game 1 against the Utah Jazz on Jun. 3, 1998, where Jordan went on to win his sixth and final NBA championship with the Bulls, according to ESPN. 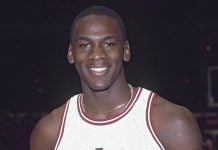