It was announced today that Nikola Jokic was voted the MVP of the 2022 NBA season. By receiving this year’s award, the Nuggets superstar won back-to-back MVPs.

He undoubtedly one of the biggest stars of the league. However, his path to glory was not so easy. The Joker was drafted in 2014 in the second round, as the 41st overall pick.

Interestingly, at the time when the Nuggets selected him, a Taco Bell commercial was playing and the people watching the NBA Draft saw Jokic’s name come up at the bottom of the screen. 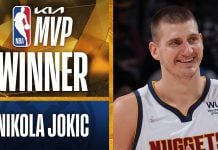