Kentavious Caldwell-Pope addressed the absence of Anthony Davis, who will be sidelined for almost four weeks with a calf injury.

Davis is dealing with a calf strain and he is expected to return to action after the All-Star break (5-11 March).

“We know we need his play, motivation,” Caldwell-Pope said about Davis, via Ryan Ward of Lakers Daily.

Without Davis in the lineup, the Lakers have lost three of their last four games and have dropped to third in the West (22-9). 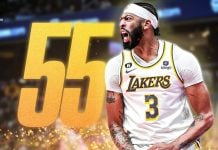