While the Los Angeles Lakers head coach Frank Vogel has not yet made up his mind whether Dennis Schroder will be starting this season, he is sure that the German point guard will be one of the key players for his team.

“He’s going to be one of our most important players, and a big-minutes player for us. I love the edge that he plays with. The nasty competitor side … you hate playing against but love when he’s on your team,” Vogel said per Mike Trudell.

Schroder himself expressed the desire to be a starting point guard for the defending champions. Last season, he had to settle for the backup role to Chris Paul and feels ready to start. 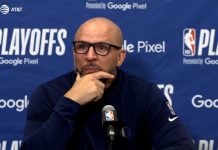 Stephen A. on Russell Westbrook’s comments on Frank Vogel Avery Bradley on Frank Vogel: “I feel like he gave me a lot of respect”