When the Los Angeles Clippers arrived in Orlando for the initial 48-hour quarantine, Patrick Beverley had an interesting way of motivating teammates.

“We’re all locked up now in quarantine, can’t leave your room, but it’s probably 2:00 a.m. and all we get is a ‘Yoooo! Yoooo!’ Everybody is like, what is going on,” Jackson said. “Bev is just yelling through walls, making sure everybody is good. It’s the first day, he’s just checking, everybody opening their doors saying what’s up, looked at each other, and that made, I guess, the first part of the 24 hours of lockdown even better, just knowing that your teammates were there with you. That’s just something very simple, but the guy is constant energy, a lot of intangibles… He’s great with the team.”

It might be considered an unusual way of bringing energy to the team, but Beverley’s teammates saw that as a sign of affection and that he would do anything to make sure they’re all good, on and off the court.

Beverley’s actions during quarantine brought the team together when they had to be apart and couldn’t immediately be with each other.

Beverley will be bringing the same intensity to the court when the NBA finally tips off again. 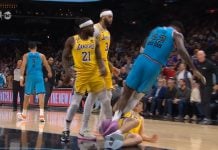 Patrick Beverley on shoving Deandre Ayton: “I would do the exact same thing”