After the Oklahoma State basketball program was hit with a one-year postseason ban, the focus turns to Cade Cunningham and what his next move will be.

The penalties come as a result of an FBI investigation into bribes accepted by former associate head coach Lamont Evans.

It wouldn’t come as a surprise if Cunningham now evaluates his options going forward, as ESPN’s Jonathan Givony tweets.

Cunningham reportedly turned down a lucrative offer from the G League elite program that was believed to be at least as much as Jalen Green (in the $500,000 range), according to Jeff Goodman.

Cunningham had no real interest at the time, but now it will be interesting to see if he has interest and if the offer is increased.

Committing to another school is still an option for Cunningham, but considering the choices of other top prospects to skip college like Green, Isaiah Todd and Kai Sotto, the odds seem pretty good that he chooses the G League path.

Here is a look at what makes 6-foot-7 guard Cunningham one of the top prospects for the 2021 NBA Draft: 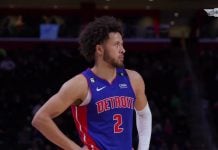 Jaden Ivey on embracing leadership role without Cade Cunningham: “It’s a role that I’m stepping into with Cade being out”