Michael Beasley shared his thoughts on the superstar of the Brooklyn Nets Kevin Durant, calling him ‘special’.

Beasley and Durant were playing together during their childhood days on the playgrounds of Prince George’s County in Maryland.

“Every rebound I would pass to KD and he would do the same s**t he is doing now. That’s the first time I realized Kevin Durant was going to the NBA. KD used to call himself KD like before anyone even knew who was Kevin Durant to be called KD.

I didn’t think he was going to be as big as he is today. That motherf***er … he was always special,” Beasley said during his appearance on Showtime’s “Basketball County: In The Water”, via Bleacher Report.

Kevin Durant should ask the Nets for a trade, says Kendrick Perkins

Kevin Durant: “I’m proud of how we just kept fighting” 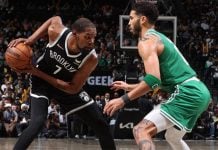