The Knicks hit the jackpot when they won the 1985 NBA draft lottery. That allowed them to select Patrick Ewing out of Georgetown with the first pick of the draft.

Ewing went on to become a franchise player and got the Knicks within a game of winning the 1994 NBA Finals. He is the franchise leader in points, rebounds, blocks, steals and games played. He is now a Hall of Famer.

Unfortunately for New York, they haven’t had much luck in the lottery since then and Ewing remains the only number one overall pick they’ve had in the lottery era.

The Knicks finished with the worst record in the league last season and had a shot at winning the lottery and a chance to pick Zion Williamson. Instead, they got the third overall pick and used it to select Williamson’s teammate at Duke, RJ Barrett.

This season is on hold but the Knicks are once again near the bottom of the league in the standings. They’ll have another shot at winning the lottery this season.

Take a look at a video how the Knicks picked Georgetown Hoyas big man Patrick Ewing: 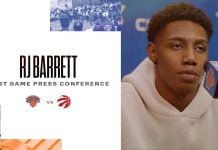 RJ Barrett on Knicks’ home loss vs Raptors: “We try to protect the Garden at all costs, and we didn’t do that tonight”