Krzyzewski called Hill the “most talented player”, while he considered Laettner as the “most accomplished”.

“Grant (Hill) was the most talented player we’ve coached at Duke. Really, he could be president of the U.S. That would be nice, by the way. The most accomplished player is (Christian) Laettner. In the history of college basketball, he’s got to be in the top three who played college basketball.

If you win a national championship you have to win six games in the NCAA Tournament. If you’re here for four years, the best you could be is 24-0. That’d be something. That’s (Lew) Alcindor like. He was 18-0 (in three years). Laettner was 21-2. He’s the leading scorer in the history of the NCAA Tournament. Just magnificent. I like both those guys,” Krzyzewski said, per Shawn Krest of Sports Illustrated.

Hill and Laettner won two national championships together in 1991 and 1992. 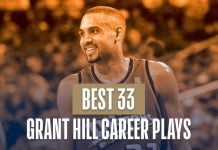