Point guard Ayo Dosunmu has declared for the 2020 NBA Draft. He hasn’t hired an agent yet but appears committed to going pro. 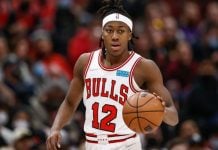 A sit down with Bulls star rookie Ayo Dosunmu

Nico Mannion expresses his joy about being part of the Warriors