Los Angeles Lakers’ superstar Dwight Howard will miss the start of the training camp which will begin on October 2, the team announced Thursday.

Lakers do not intend to announce a timetable for Howard’s return, but “the Superman” won’t be in action when the team faces Golden State Warriors in their preseason opener on October 7.

Howard began working with the Lakers head trainer Gary Vitti, and his training staff. According to the statement made by the team on Thursday night, Howard’s current therapy consists of light running, core stabilization, lower and upper body strengthening, and shooting. Howard’s personal trainer, Bryan Meyer, is also with the training staff as the superstar continues his rehabilitation from his spinal surgery.

In the press conference after the Lakers traded for Howard, the 26-year-old has said he hopes to be ready in the season opener on October 30. But -for now- it doesn’t seem very likely. Howard also mentioned that the back is serious, and he will not rush until the doctors tell him he is hundred percent ready. 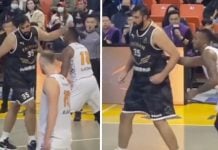