The Serbian basketball federation is reportedly in advanced discussions with Denver Nuggets head coach Mike Malone to hire him as a top aide and consultant.

Serbia’s best player, Nikola Jokic, who is also Malone’s best player for the Nuggets, has played his entire five-year NBA career under Malone.

Even though Malone is American, Jokic would provide him a connection to a Serbian team that has high expectations this summer.

Serbia earned a silver medal at the 2016 Olympics and a fifth-place finish at the 2019 FIBA World Cup.

Along with Jokic, Bogdan Bogdanovic, Nemanja Bjelica and Boban Marjanovic will also play key roles in the team’s qualification.

Serbia didn’t qualify directly to the 2020 Olympics through the World Cup, but they will get a chance to qualify through the FIBA Olympic Qualifying Tournament in June.

A potential deep playoff run by the Nuggets would mean a short turnaround for Jokic and Malone before the Olympic Qualifying Tournament. 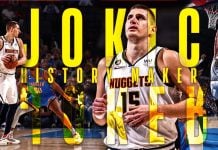