Nikola Mirotic set a new career-high in the ACB and led Barcelona past Valencia in a late thriller at the “Palau Blaugrana” (97-94).

Barcelona improved to 3-1, whereas Valencia dropped to 2-2. 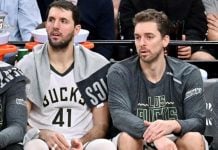 NBA executives expect P.J. Tucker to end up with 76ers

Joel Embiid laughs at Donovan Mitchell after he tried to dunk...