Per Roi Cohen, Milos Teodosic expressed his concerns on the depth and quality of Maccabi Tel-Aviv’s roster next season.

Although the Israeli team is still in talks with the Serbian guard, Teodosic is concerned that Maccabi may not be able to fight for the playoffs and the Final Four next season.

According to Cohen, the Israelis will further strengthen their roster, while they are optimistic Teodosic will eventually join the team. 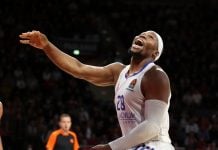