Manresa becomes the first team in the Liga Endesa to use Scoutim to search for prospective young people from all over the world.

Scoutim is already used by the best teams and academies in Europe and the USA to attract talent around the world in a quick and easy way, while reducing costs by up to 90%.

Per the official press release: “The historic club Bàsquet Manresa, currently seventh in the standings of the ACB, the second-best league in the world, has made a leap in its bet for the incorporation of new technologies to the sport and will attract young people with talent through the digital platform Scoutim.

In this way, the club will search for prospective young people from anywhere in the world to add to its youth team and give them the opportunity to form a competitive team in the Spanish and European basketball.

Thanks to this campaign, the club will be able to reduce its recruitment costs by up to 90% and reduce processes as well as democratize the traditional sports industry, as they will have access to profiles, which, without the use of the platform, would be very difficult to get to know.

Among all the players that meet the requirements and are registered in Scoutim.com, the club may call those of higher quality to make tryouts in their facilities.

Per Jon Fatelevich, CEO of Scoutim: “For us it is a giant step that a team of the Endesa League trusts us and begins to use Scoutim to attract talent. I am sure they will achieve excellent results as other teams and academies in Europe and USA already do.”

He also spoke of the benefit of incorporating technology into the sports industry: “The technology in sport is here to stay, it may take more or less, but it will be unstoppable and the world of sport is going to change. I believe the sports organizations that do it first will be the ones that benefit the most.”

The LinkedIn of sport

The Scoutim platform aims to provide the opportunity for amateur and professional athletes from around the world to make themselves known to the sporting community and have the possibility of being signed by a club or scholarship by an academy to develop their sporting career.

It should be noted that the platform Scoutim.com is already used by teams of first and second division of European football and basketball and by the best tennis academies in the world, such as the Juan Carlos Ferrero-Equelite or the scholarship management company I-Consports, Carlos Costa and Rafa Nadal.

In addition, Pablo Aguilar, player of the Spanish national basketball team, and Juan Pablo Sorín, former captain of the Argentine national football team, are among its partners.

The enormous potential of the tool has opened a new scenario in the sports industry that opens the door to a true revolution that pushes sports organizations to digitize their selection processes. 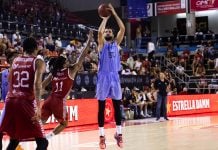