Different from Ewing, Lofton did not play this season due to a family issues but is ready to show what he can do best. Lofton played in such teams as Vitoria Caja Laboral, Krasnodar Lokomativ-Kuban and Istanbul Besiktas.

This season Ewing averaged 9,5 points and 4,5 assists per game while last season in Lithuania his numbers were 13,2 points and 3,6 assists. While Lofton last season spent in Le Mano Sarthe team and averaged 11 points with 35% shooting from three in Euro Cup.

Neptunas found themselves desperate for new players after Larry Drew and Omari Johnson were released for breaking team rules and Jimmy Baron were sold to Vilnius Lietuvos Rytas as they could not match the salary that Rytas offered to shooting guard. 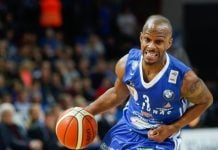