Czech Republic beat Latvia 97-70 in the final Eurobasket 2015 classification game in Lille to book their place into the Olympic Qualifying Tournament by finishing sixth.

Jan Vesely led the victorious Czechs with 24 points as they raced away from the tired Latvians in the second period, turning a 28-23, first quarter advantage into a 57-36 cushion.

Led by Vesely, the Czechs held Latvia to just nine points in the third to take an 80-45 lead heading into the fourth.

“It’s been a great success that we won this to qualify for the [Olympic Qualifying] tournament,” Vesely said.

“But now it’s over, so we have to go get some rest and prepare for our seasons.” 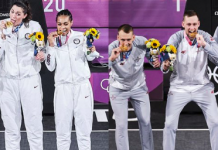