“It’s a grown man business. I’m sure they got to spoke about it amongst themselves. Whatever they choose to do, we got to honor that,” Shumpert said. 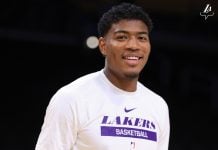