The Golden State Warriors are NBA champions once again, topping the Boston Celtics 103-90 on Thursday night for their fourth title in the last eight seasons. The Warriors leader Stephen Curry scored 34 points and was named the NBA Finals MVP. Jaylen Brown led the Celtics with 34 points but Jayson Tatum finished with just 13, shooting just 6 of 18 from the field.

Following a season-ending loss to the Golden State Warriors, the Boston Celtics power forward Grant Williams talked about the message the Warriors star Draymond Green gave him after Game 6: “He basically just said ‘You’ll be back and when you get back don’t allow the opportunity to slip again.'” 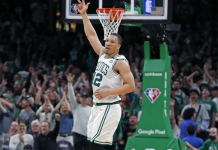 Grant Williams on Warriors: “I remember where I was the first time they won it”