Giannis Antetokounmpo scored 25 points, grabbed 20 rebounds and dished out 9 assists in Game 7 of the second round series against the Celtics but it wasn’t enough as the Bucks were beaten heavily by Boston (109-81). This loss ended the season for the defending NBA champions.

In this series the two-time NBA MVP averaged 33.9 points, 14.7 rebounds and 7.1 assists in 40 minutes per game and made life difficult for his opponents.

Jaylen Brown was asked about playing against Giannis in a seven-game series. “Giannis is the best player in the world,” he said. “You can see why a lot of people say that. I think that he’s just relentless in his approach. He is aggressive all the time and he’s just not going to be denied.

“That was tough for us this series to fit his level of physicality, challenged us all to be disciplined, to match his aggressiveness and it was incredible the way he was able to do with his team.

“They’re scoring 90, 100 points and Giannis got 40 of them in multiple games. That sh*t is crazy. Giannis is a great player and he knows that. We get respect whispers, credit where credit is due.” 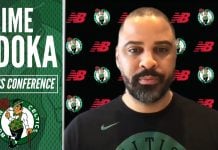