Former NBA champion Paul Pierce is not too excited about the new-look Los Angeles Lakers which is mostly made of veteran players.

The Hall of Famer sees similarities between the current Lakers roster and the team from the 2003-2004 season which had accomplished veterans, such as Karl Malone, Gary Payton, next to Kobe Bryant. That team went all the way to the Finals where they lost 1-4 to the Detroit Pistons.

“This team is really giving me that Karl Malone, Gary Payton when they were with Kobe, that kind of feel,” Pierce said on What’s Burnin’ with Stephen Jackson and Matt Barnes.

Patrick Beverley: “We turned this Laker city into a Clipper city”

Six Spurs players out for Sunday’s game vs the Lakers 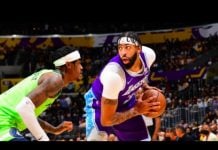 James Worthy after Lakers’ heavy loss vs. Timberwolves: “That third quarter was ugly”

Patrick Beverley: “We turned this Laker city into a Clipper city”

Alex Caruso on what he learned from LeBron James that he...

Rick Carlisle: “Winning games in the NBA this year is as...

President thanks Enes Kanter for ‘standing with Taiwan’

Kevin Garnett on LeBron James: “I definitely talked some sh*t to...

Joe Biden hosts Bucks: “I’m supposed to introduce somebody… what are...