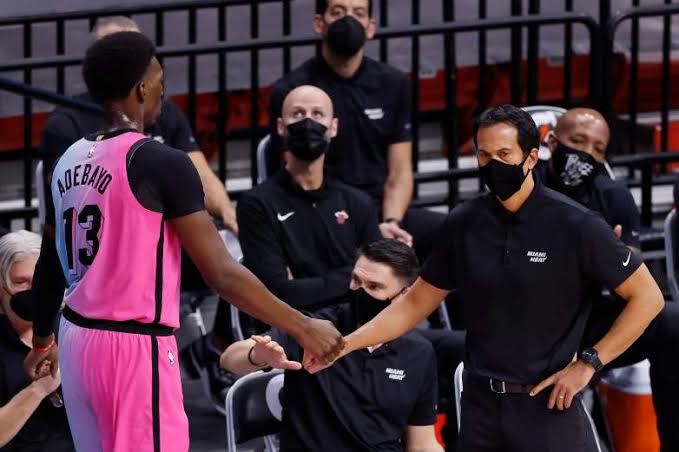 From the eyes of Miami Heat’s lead strategist Erik Spoelstra, rising big Bam Adebayo is heading in the right direction towards NBA superstardom.

But, at this time, wherein people are getting curious badly about the skills of the kid out of University of Kentucky, he sure speaks out.

Speaking in front of the media men, Spoelstra was high about the potential of Adebayo. And when someone suddenly raised a topic about three-point shooting, the 50-year old head coach questioned “why everybody is so obsessed” with the idea of Bam adding a shooting ability from downtown.

“I don’t know why everybody is so obsessed about that. The guy is improving in every aspect. I watch him in his workouts. He can make the corner three as good as basically any of our bigs. But he has the ball in different areas.”

Spoelstra further pointed out the other things that Adebayo is capable of doing.

“More importantly is his assertiveness and his ability to attack different gaps and be able to make mid-range and long-range shots with great accuracy now.”

In an era where shooting is a necessity, there’s no doubt that people will always look forward to every player jacking up some long bombs.

But coming from someone who is seeing the progress of the young big man on a daily basis, trusting the process should be followed.

Last season, Bam averaged 25 percent from the three-point line — sinking two shots out of eight attempts. As the new season is nearing, we can only guarantee that he added some stuff in his bag of tricks as a center of the tough-minded Heat lineup.