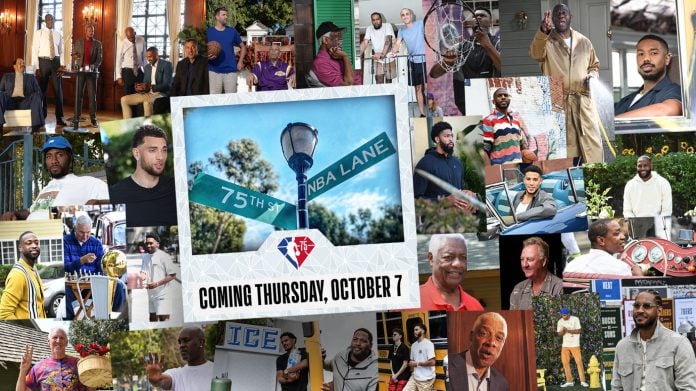 NEW YORK, United States of America, October 5, 2021/ — The NBA today announced the global premiere of “NBA Lane,” a short film celebrating the league’s storied history ahead of its 75th Anniversary Season, which will stream across all NBA social platforms and on NBA.com/75 beginning Thursday, Oct. 7 at 12 p.m. ET as part of “NBA 75” flagship campaign. The film stars actor and producer Michael B. Jordan and more than 30 NBA players and legends coming together to tell the story of the past 75 years through a comedic and fun lens.

Set in a fictional neighborhood where current NBA stars and legends reside, “NBA Lane” takes fans on a journey with the personalities – past, present and future – who have written the history of the game. In the three-minute film, Jordan serves as the neighborhood “Hoop Bus” driver taking a group of children on a tour of the NBA neighborhood that houses 75 years of basketball culture. As the bus rolls through the streets of the community, the passengers encounter these prolific figures in everyday settings. From former rivals Magic Johnson and Larry Bird becoming friendly next-door neighbors; LeBron James tending to his garden; Kareem Abdul- Jabbar teaching Dirk Nowitzki the art of the hook shot; to Zion Williamson breaking a backboard at the street court, it is just another day in the neighborhood. The tour honors both the NBA legends who have laid the foundation of the league and the current players who are shaping its future.

“‘NBA Lane’ was created as a way to honor both the history and future of the NBA,” said NBA Chief Marketing Officer Kate Jhaveri. “We are thrilled to bring together some of the league’s greatest players and legends to celebrate not just the NBA’s 75th Anniversary Season, but also the connection fans have built with our game.”

“As someone who has been a member of the NBA Family for the past 65 years, I can truly say, like I do in ‘NBA Lane’, ‘This game just keeps getting better,’” said NBA Legend Bill Russell. “Being a part of this film, alongside so many greats representing nearly eight decades of the league’s history, is a great thrill and a tremendous honor.”

Click here to view a sneak peak of the film:

Created in conjunction with Translation LLC, the short film was directed by Rick Famuyiwa (“Dope” and “The Mandalorian”) and Emmett Malloy of the Malloy Brothers (“Easy Express” and “The Tribes of Palos Verdes”). “NBA Lane” will begin airing on television networks Sunday, Oct. 10. Additionally, 30- and 60-second versions of the film will air across all platforms during the fall. More adaptations will be produced around marquee events throughout the season featuring a variety of new faces.

The full cast of “NBA Lane” includes the following:

The NBA’s 75th Anniversary Season tips off on Tuesday, Oct. 19 on TNT with a doubleheader featuring the defending champion Milwaukee Bucks hosting the Brooklyn Nets (7:30 p.m. ET), followed by the Golden State Warriors visiting the Los Angeles Lakers (10 p.m. ET). For the latest details on NBA 75 celebrations, including opportunities for fans to participate, visit NBA.com/75 and #NBA75 on social media throughout the 2021-22 season.

Jordan’s participation in “NBA Lane” stems from his love for the game of basketball and his shared commitment in spotlighting Historically Black Colleges and Universities (HBCUs). His Invesco QQQ Legacy Classic, taking place on Saturday, Dec. 18 at the Prudential Center in Newark, N.J., will feature an HBCU doubleheader on TNT and highlight HBCU life and culture.