The final countdown to FIBA EuroBasket 2022 commences with a bang as today marks exactly one year to the initial tip-off of Europe’s flagship basketball competition, set to take place from September 1-18, 2022.

Every edition of the FIBA EuroBasket commands worldwide attention, with Europe’s brightest stars taking to the floor to proudly represent their respective nations and battle it out for the coveted trophy.

However, the 41st edition of the event, hosted by Czech Republic, Georgia, Germany and Italy, may be the most eagerly anticipated in the glorious history of the competition, as five years will have elapsed since the 2017 coronation of reigning champions Slovenia in Istanbul.

The cities of Prague, Tbilisi, Cologne and Milan will play host to one group each, with the top 16 teams converging to Berlin for the Final Phase. The German capital of course provided the stage for one of the four groups in 2015 and the last game there saw Dirk Nowitzki, now a FIBA EuroBasket 2022 ambassador, make his farewell appearance with Germany.

FIBA EuroBasket 2022 will get underway with Group A and Group B action, in Tbilisi and Cologne respectively, on September 1 while the Milan-based Group C and Group D in Prague will tip off a day later.

Tickets for the games in both Cologne and Berlin are already available, with tickets in other venues set to go on sale soon.

FIBA EuroBasket 2022 Draw: Everything you need to know 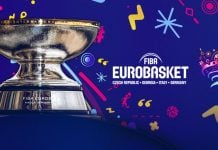