Zenit Saint Petersburg escaped from “Palau Blaugrana” with a big victory over FC Barcelona (74-76) to take the upper hand in the series (0-1).

In a late thriller that was decided in the final seconds, Kevin Pangos (19 points) handed his team the victory, thanks to his two-pointer, with 19 seconds to go. Cory Higgins had the chance to win the game for FC Barcelona, but missed the three-pointer at the buzzer.

The Catalans trailed by as many as 17 in the contest (29-46), but came back to tie the game (74-74). Yet, they came up short in the end and Zenit managed to steal the home-court advantage.

FC Barcelona will now attempt to even the series, with Game 2 against Zenit set to take place on Friday. 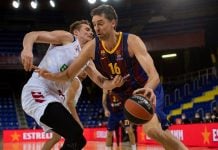 LeBron James talks on his return after Lakers’ win over Pacers