Sasha Vezenkov set four career highs on Thursday night while leading Olympiacos Piraeus to an 80-84 road win against ALBA Berlin, keeping the Reds in the playoff hunt while earning the first weekly MVP honor of his six-year EuroLeague career.

Vezenkov’s personal bests came in points (31), three-pointers made (6 of 7), defensive rebounds (8) and performance index rating (41), which shattered his previous high of 26 and came just 1 shy of Olympiacos single-game PIR record.

Olympiacos forward also had 2 steals, 1 block and 5 fouls drawn while making 4 of 9 two-point shots and all 5 of his free throws on Thursday.

And with his 2 offensive rebounds, Vezenkov achieved the EuroLeague’s first 30-point, 10-rebound double-double this season. 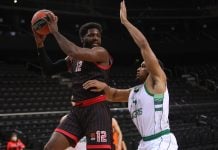 Cavaliers hope Anderson Varejao to finish his career in Cleveland, per...