Modern era NBA players are getting called out by some of the league’s greats, such as Shaquille O’Neal, for being too sensitive to their criticism. Another area of criticism they received from some of the retired players is being too friendly with their opponents.

At the end of the game, the players of both teams hugged which Perkins and Scalabrine thought to be wrong. While being friends, they recalled to not hugging when they were on opposing teams.

“Getting smacked by 30 and going to hug your opponent after the game ain’t it!!! I guess it’s the new generation,” Perkins tweeted. If you feel disrespected or clowned, DO something about it! – Kendrick Perkins on Lakers loss 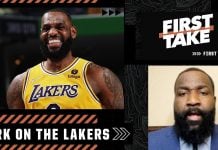