Los Angeles Lakers 20-year-old guard Talen Horton-Tucker scored 17 points – a new career-high for him – on 7-of-8 shooting from the floor and 2-of-3 from deep in tonight’s victory against the Houston Rockets. He also contributed five rebounds, three assists, and four steals – the third of which is also a career-high. After the game, Horton-Tucker talked to the media:

“I always said I just want to learn. I feel like being a sponge is the most important thing you have to do when you are learning, especially with the caliber of guys that we have. Just being a sponge is probably key to doing good things this year.” 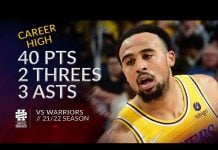 LeBron James & Talen Horton-Tucker are both available vs. Pelicans

Talen Horton-Tucker on how he approaches trade rumors