Dallas Mavericks star Kristaps Porzingis is dealing with irritation in his right knee, but he hopes to play in tonight’s game.

It’s not the same knee as his repaired ACL, but Porzingis missed 10 games this season with soreness in that right knee, according to ESPN’s Tim MacMahon.

Porzingis is officially listed as questionable for Game 2 against the Los Angeles Clippers.

Porzingis and Luka Doncic form a dynamic one-two punch when they are on court together and the Mavericks’ success largely depends on those two stars.

Stephen A. Smith on Kristaps Porzingis: “He seems to be somebody that’s jealous of Luka Doncic”

“Luka Doncic and Kristaps Porzingis don’t like each other,” says NBA insider 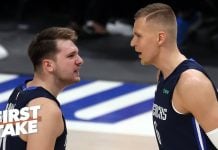 DeMar DeRozan spoke with LeBron James about the possibility of joining...