Giannis Antetokounmpo said he is not at his very best yet, just a few hours before the Milwaukee Bucks’ opener in the NBA restart.

The reigning MVP added he is not ready yet, but ‘around 70, 75%’ and will need a few games to return to top shape.

“If I had to give a percentage, I’d probably I’m 100 percent excited to play but I always feel that I can get better… so I’m around 70 percent, 75.

I’m excited to go but obviously I haven’t played for a long time. As a player, I know that when the season starts, usually I’m a little bit behind. I’m all over the place just because of excitement I foul a lot, my passes aren’t that sharp. But I know that as the games go on I get better and better.

Usually, I play my best basketball from the mid towards the end of the season. Obviously, I feel I’m going to be better when the playoffs start than in Game 1,” Antetokounmpo told reporters, via Eurohoops.net. 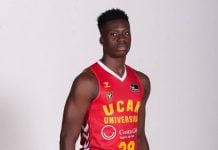