Memphis Grizzlies head coach Taylor Jenkins plans to bump up Ja Morant’s workload with Tyus Jones out for about a week.

“I think early on we’ve had a very thoughtful process for how to handle this from a roster standpoint, but in Ja’s case, he’s built [for] the ability to play more minutes,” Jenkins said. “… We anticipate him, hopefully, playing a little bit more than he did during the regular season. … It’s just going to be a feel. I don’t want to overtax anyone – Ja in particular – but anyone on our roster in the early games. As important as these games are, there are still eight games to be played and we have to be very thoughtful about it and not overdo anything to increase a workload that’s going to impact us negatively in the long run.”

This season, Morant is averaging exactly 30 minutes per game, but he won’t be able to shoulder the full load.

With Jones out due to knee soreness, Jenkins knows other guys will have to step up.

“We are going to have to get creative a little bit with how we handle the point guard position,” Jenkins said. “I have a lot of confidence in the playmakers on our team. Kyle Anderson and De’Anthony Melton are guys that have gotten the opportunity, whether it’s this season or over the course of their career, to play some point guard. … I spoke to both of those guys … about the importance of continuing not to change what we have done.” 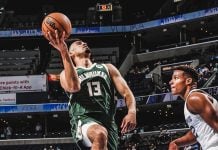 Klay Thompson: “You see that top 75 list? Forget that sh*t!”